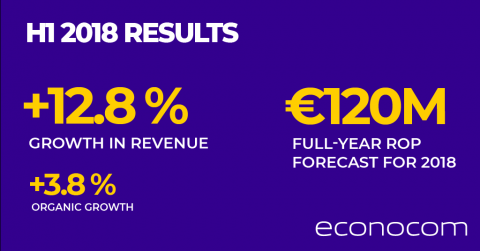 As announced previously, Econocom Group reported H1 2018 revenue of €1,319 million, up 12.8%, 3.8% of which on a like-for-like basis. All the group’s activities registered organic growth for the first half.

Recurring Operating Profit1 (ROP) amounted to €34.2 million for the first half of 2018, compared with
€58.2 million for the first half of 2017. ROP for Technology Management & Financing (TMF) was notably affected by provisions amounting to around €9 million, the postponing of several substantial deals to the second half and the dilutive effect on short-term margin of signing new clients.

The transformation efforts of the group and particularly of Services led it to recognise non-recurring expenses to the amount of €20.4 million for the first half. Operating profit thus stands at €11.8 million.

Net profit for H1 stands at €0.4 million, whilst recurring net profit attributable to owners of the parent reached €10.9 million.

The Group’s net debt stands at €395 million, which reflects the usual seasonality of business. Debt is under control, standing at 2.4 times EBITDA over a 12-month period at 30th June 2018. Most of the financial debt, €260 million, is linked to clients leasing contracts of TM&F and is backed by lease payments to be received and by leased assets, property of the group.

The group has substantial and diversified financing sources, such as convertible bonds (EuroPP, Schuldschein and OCEANE), as well as more than €230 million of unused lines of credit at 30th June 2018, €140 million of which do not have restrictive clauses.

When it met on 17th July 2018, the Board of Directors reiterated its complete confidence in the group’s prospects and mandated its Chairman, Jean-Louis Bouchard, to buy back treasury shares of up to €30 million over the next ten months, depending on market conditions.

In line with the annual outlook given on 5th July, the group expects recurring operating profit1 of €120 million for 2018.

The action and transformation plans launched by Management over the past twelve months will support this target. The group plans to generate €10 million worth of gross savings in the second half, €3.5 million of which will be in the central functions and 6.5 million in the operational divisions.

Robert Bouchard, CEO of Econocom, said: ”In the second half we will benefit from the action and transformation plans launched over the past twelve months. The efforts we have made to reduce costs, combined with strict cash flow management will allow us to reach our short-term targets whilst continuing to invest in modernising some of our business lines and certain promising new offers. These initiatives will help improve profitability and maintain growth in the short and medium term. We are laying the foundations of profitable growth for the coming years, by focusing on the end users of our solutions and on our teams’ ability to offer and deliver end-to-end digital solutions.”

[1] Before amortisation of intangible assets from acquisitions
Consolidated, unaudited data